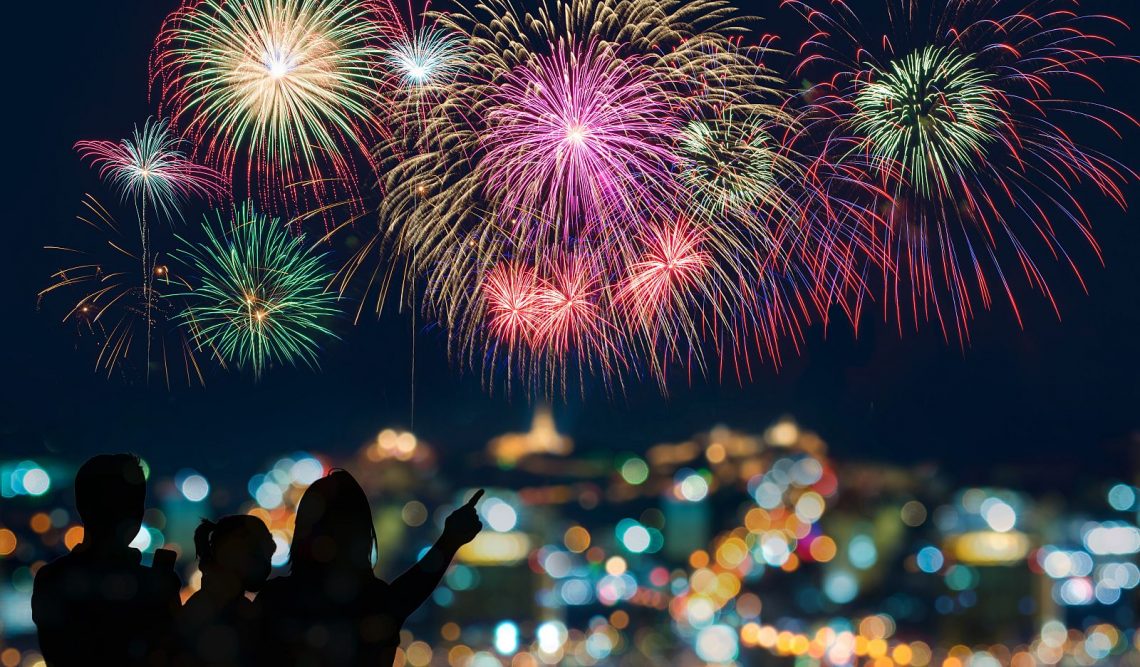 We all know about kissing at midnight at a New Year’s Eve party or singing Auld Lang’s Syne, but there are other New Year’s Eve traditions that are just as fun.

For example, did you know that it was the Chinese that first start letting off fireworks on New Year’s Eve? It’s to do with the old tradition of making a bang at New Year to send off the old year and being in the new one. In the US colonies, soldiers would fire guns, and in the UK the church bells would ring out. So what other New Year’s Eve traditions are there?

Just when you thought the season of gift-giving was over, here comes the New Year! It is considered to be a lucky omen for the rest of the New Year to give a gift. However, it has to be a certain gift that represents good luck. The Persians, for example, would give eggs to symbolise fertility.  Coal and shortbread are given in Scotland for good luck. In Rome gold coins or gilded nuts were presented to loved ones.

On New Year’s Eve, we eat lucky food. But what exactly is lucky food? Well, in Dutch homes anything ring-shaped is considered to represent good fortune, so they eat a lot of doughnuts. Rice is a symbol of prosperity in Pakistan and India. Apples dipped in honey is a Jewish New Year’s tradition. And in the US, a hog roast with black-eyed peas is a sign of good fortune.

This is one of those New Year’s Eve traditions you might have heard of, but we think it is worth delving into a little deeper. Because although you may know about it, you might not know why it exists or where it comes from. So, in Scotland, the tradition of who walks over your doorstep is very important. They are the people that are the first people to enter your house after midnight on New Year’s Eve. Apparently, they are able to predict your future for the coming year. Lucky first footers are new brides, tall, dark and handsome men and people born on January 1st.

Who knew a doorstep would play such an important part of our New Year’s Eve traditions? But it features in many parts of the world. In Denmark, revellers see in the New Year by smashing plates on their neighbour’s doorsteps. Whereas in Turkey it is traditional to sprinkle salt on the doorstep. This is thought to bring peace and good luck to your house.

Water also plays a big part in traditions. From Russians and Siberians jumping into a frozen lake whilst holding a tree trunk, to the Burmese splashing water on each other to purify their souls. In Puerto Rico, people throw buckets of water from their windows to banish bad spirits and in Canada thousands take part in the Polar Bear Swim, a swim in the frozen water of the English Bay.

Now, this isn’t the same as leaving your Christmas tree up until New Year and swapping the decorations. This is a thing in its own right. Russia banned trees after the revolution in 1917. But they slowly made a comeback in the late 1930s, but not at Christmas. They could celebrate the New Year. We don’t suggest you go out any buy another tree. But if you have an artificial one or your real one still has some life in it, why not change the baubles for some other kind of decorations? However, if you want to get rid of an old Christmas tree and make that into a tradition, you might want to know that in the Netherlands they take all the old Christmas trees and make a huge bonfire out of them.

Finally, wearing certain colours seems to be a large part of New Year’s Eve traditions. For instance, red features heavily in many countries of the world. Wearing red on New Year’s Eve in Italy brings good luck. Residents decorate their houses in Mexico with different colours representing their wishes, red for love, green is money and yellow is work. Wearing pink underwear in Argentina attracts a new love interest.  In Brazil, people throw white flowers into the ocean as an offering to the Goddess of the sea.